So the Cubs just showed everyone they were a 1 hit wonder losing to the Dodgers 4-1 in the NLCS. Not only did they lose, they got SMACKED around. We love to have fun at the expense of the Cubs and found this Tweet by @Denlesks one of the funniest of the year. Had to post it.

Check out the manager of the Dodgers, Dave Roberts — as he smacks that on Joe Maddon of the Cubs. 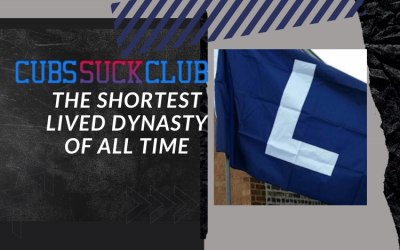 The 2016 Chicago Cubs: The Shortest Lived Dynasty of All-Time

The 2016 Chicago Cubs were supposed to be a dynasty. They should still be running strong, but now, here we are, Flying the L!!