Cry Me A River, LOSER Shirt

Ryan Dempster and Cubs third basemen Kris Bryant decided to take on St. Louis and the Cardinals as they put on a silly skit at the Loser Convention. Bryant, who has been noted to not spend ANY of his free time in Chicago went on to call St. Louis boring. Dempster piled on with some incredibly stupid comments, and it was on.

John Brebbia joined the party with the comment that won Twitter. He was asked about the Bryant comments and he said â€œCry Me a River, Loserâ€. That went viral, and now sees to be an incredible motto for the Cubs and all their salty fans all over the country. Yadier Molina doubled down with an instagram post basically calling him a loser as well.

This shirt is brought by popular demand. Enjoy and see you at a baseball game near you soon! 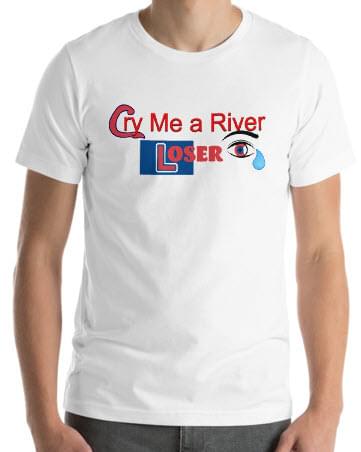 *** We keep this shirt very affordable as it’s made of 100% ring-spun cotton, but pre-shrunk and has a tear-away label. It’s comfortable and the unisex cut is flattering for both men and women. ***

Use Code: Summer30 at Checkout